Handpresso – Prepare an authentic espresso anywhere, even in your car

Are you a coffee connoisseur and do you need the real taste of espresso on the go? Are you not content with stale coffee from thermos or the undrinkable slop from the petrol station? Scared of vending machine coffee? If so, Handpresso is likely to be the direct answer for you.

A small appliance that looks like an espresso machine arm is trying to completely replace the traditional coffee maker. Why is the Handpresso better than other means to produce coffee, such as Coffeebrewer, when on the go? The key difference is that this apparatus is capable of exerting pressure which, for the preparation of true espresso, is necessary. This is taken care of by the pump, which is located in the Handpresso handle, which pressurises the device, in the same way as when pumping up a tyre. A small pressure gauge on the Handpresso handle indicates when it is appropriately pressurised (16 bars is required).
Then just pour in hot water and allow it get to work with physics – the water pressure is passed through coffee in the tray. The result is a cup of espresso. For all those who are still in need of some enlightenment after this paragraph, here’s a video that nicely demonstrates how to work the Handpresso.

The first Handpresso model (sometimes also referred to as the Handpress Pump), was presented in 2008 in Milan’s Wild ESE. The last three letters indicate that it requires special coffee cartridges, called PODs. These are round coffee „pads“, which contain the optimal amount of ground coffee. To ensure the correct preservation of coffee, each POD is vacuum sealed.

Unlike its older, already „wild“ brother, the Hybrid model is not reliants on PODs and the tray can accommodate virtually any type of ground coffee (espresso of course). This option is probably better as you need nothing more than ground coffee and hot water.

Handpresso Auto ESE – a cafe in the car

A real treat for those who spend a lot of time in the car. This Handpresso, labeled Auto ESE, is simply plugged into the cigarette lighter at 12 volts, filled with water and and finished with a POD (coffee cartridge). Electricity will then take care of the rest – this Handpresso in not only self-pressurized but will also heat the water. After about 3 minutes, the device reports that it is done using audio. Only then can you enjoy a perfect espresso inside your car.
With the Handpresso Auto you can enjoy a great espresso at the wheel. 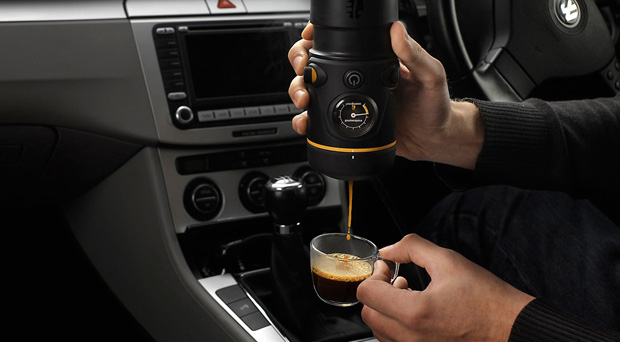 The advantage is really good coffee which qualifies for true espresso. The Handpresso is truly mobile, prepare coffee anywhere – in a backpack weighing 0.5 kg it’s hard to tell the percolator is even there. A perfect gadget with easy handling and the designer look is also ranked amongst its benefits.
The unit itself is relatively expensive – the Wild ESE model can be bought for around $89.99 and the Hybrid model also for about $89.00. Of course, the most expensive model is the Auto ESE, which costs roughly $188.83.

Not really. We can buy the Handpresso in various forms in more than 50 countries worldwide and they have sold nearly half a million pieces. It has been created around a large user community, which includes a variety of accessories.

The Most Popular Posts